Barely three months after the idea was conceived, the calendar is a physical entity. And to launch it, a group of glammed up calendar stars, press types and various others convened on Thursday 18th October at the Smith Centre, part of the Science Museum.

My day started when I met ScienceGrrl director Heather Williams and Ellie Cosgrave at calendar producer Louise Crane’s house (aka “Crumble Towers” after her Twitter handle, @lulucrumble). Ellie and I are both production assistants, and have helped Louise out with numerous little tasks from organising photo shoot venues to ordering envelopes.

I arrived around 4pm, and the flat was a hive of activity. There were boxes of calendars that had just arrived, bags, business cards… and biscuits. These FABULOUS cookies were designed by @quirkycookies (real name Wendy Staples who blogs at http://quirkycookiescakes.wordpress.com/) who was also at Crumble Towers along with her husband and daughter. To top it off, Louise’s family were there too, all squashed into her one-bedroom flat. Her poor seven-week-old kitten Loki didn’t know what to make of it all – though I suspect he probably thought we were all there to see him.

We set about glamming ourselves up whilst stuffing the goody bags with treats, and before long we were in taxis heading to the Smith Centre.

We arrived to an excellent room, full of all sorts of scientific curios, and the bar was already set up. We had barely finished laying out the calendars when the crowds started amassing. It was great fun standing by the calendars, and watching people come over and look at the pictures. As they flicked through the months, I often heard, ‘ooh this is a great picture, OH I like this one, oooh, this one’s even better’. Julie Gould did exceptional work manning the stall, thanks Julie! special thanks also to you Suzi! or should I say, Disco Bambi!

Lizzie Quill was our “go to” at the Science Museum. She laid on a great evening, with plenty of space to mingle, and with drinks and conversation flowing. Thanks should also go to Science Grrl’s party organiser Jon Wood who I don’t think I saw stand still the whole night!

But the stars of the show (apart from the calendars themselves) were Heather and Louise. Both had put in SO MUCH work, and to see them turn around a professional, beautiful calendar in such a short time was astounding, I feel really lucky to have been a part of it! Their speeches were excellent, their enthusiasm came across, which explains why they were able to put in such a superhuman effort. There were flowers and gifts for them, as well as gifts for myself and Ellie. I got MRSA – the cuddly microbe that is… Ellie, an engineer, received an amoeba that Louise insists looks like the Eiffel Tower… 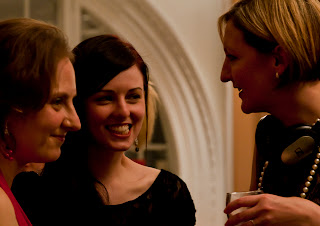 A special mention should also go to the fabulous Mrs Crane, otherwise known as Louise’s Mum. She was surely the oldest person at the party (at age 66) and indeed wearing an original 1980s dress that is likely older than many of the people at the party! Louise made me write this, because she says that without her Mum, she wouldn’t be here in the first place to have made the calendar.

After the speeches my memory gets a little hazy – I remember a lot of giggling, chatting with some lovely people, and (a personal highlight) singing in Welsh with Gareth Jones! Sadly when the time came for the karaoke after-party, I bailed and retreated home. But by all accounts the night continued in to the wee small hours.

Now that the launch is over, I’m back to Crumble Towers today to begin posting out the ordered calendars. So if you’ve pre-ordered, start to watch your postbox!