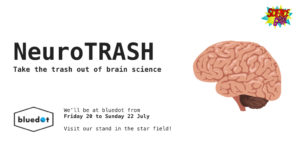 The content of this blog is explored in Angela Saini’s book, ‘Inferior: How science got women wrong and the new research that’s rewriting the story’. We encourage everyone to read this wonderful book!

The brain is a wonderful organ that truly makes us who we are. But, unfortunately, it has been at the epicentre of sexism throughout scientific history. This phenomenon has been colloquially coined as ‘Neurosexism’:, when neuroscience, the study of the brain, is used to discriminate against someone because of their gender. On the Science Grrl stand at Bluedot Festival 2018 we are aiming to stamp out the ‘Neurotrash’ in neuroscience and set the story straight – with many thanks to topics discussed in Angela Saini’s book ‘Inferior’!

Neurosexism is not something new. In the 19th century, the famous biologist himself, Charles Darwin, argued in a popular science magazine: “Seeing that the average brain-weight of women is about five ounces less than that of men, on merely anatomical grounds we should be prepared to expect a marked inferiority of intellectual power in the former.”

Yes, this changed my opinion of Darwin too.

Battling this argument later on that century, women’s rights advocate, Helen Hamilton Gardner, explained how such scientific ‘facts’ were being used against women’s fight for equality. In her talk, titled ‘Sex and the Brain’, at the International Council of Women in Washington, DC, she rightly explained that just because women’s brains are lighter than men’s, it did not mean that women are less intelligent – much to the dismay of many renowned scientists in the audience.

Upon challenging the scientists who disagreed with her, not one could actually explain the difference between a male or female brain. As she aptly highlighted, the weight of the brain cannot possibly measure intelligence, otherwise “an elephant might out-think any of us.”

Gardner’s argument against Darwin’s views in the midst of the suffragist movement is one great example of how scientific narratives were (and still can be) shaped by sexist attitudes of the time. Science is not separate from culture, and therefore culture, and attitudes, can influence scientific conclusions.

Since the 19th century, researchers have moved on from the weighing and measuring of brains to assume human intellect or behaviour. However, even today, there are still neuroscience topics that are subject to cultural sexist stereotypes.

Despite a small cohort of participants in the study, news headlines across the world encompassed presumptuous and misleading statements. This ranged from “Brains of Men and Women Are Poles Apart” to “Males and Females Brains Really Are Built Differently”, and the down-right ridiculous “Women c*** at parking: official”. This study, and its misleading media coverage, dangerously reinforced the prehistoric idea that women ‘compliment’ men as the emotional supportive housewife to the hard-working analytical male.

Not only does this example prove how weak scientific findings can be hugely amplified by current cultural opinions, but this also represents how incredibly important it is for accurate scientific reporting in the media. These headlines, used purely to attention grab, have mislead public audiences, consequently damaging the reputation of the media as being a trustworthy source of news – all for the sake of sales targets.

As this study had a very small number of participants, the results likely had low statistical power, and were thus not reliable – something that was once found as being an “endemic problem” in neuroscience. As science communicators, as many of the Science Grrl team see ourselves, we have a duty to do our upmost to accurately and transparently convey scientific information to ensure science is not misleading, and can be accurately understood by all.

Despite neurosexism operating throughout scientific history to this very day, study after study continues to show that almost all psychological and behavioural differences between men and women are small or non-existent.

On the ScienceGrrl stand at Bluedot Festival 2018, we’re hoping to, as Angela Saini put it, demonstrate “the new research that’s rewriting the story” to prove how women are not inferior to men.

Make sure to visit the Science Grrl team in the star field from 20-22 June to learn all about ‘Neurofeminism’ – the alternative approach to brain science that will stamp out gendered stereotypes.

Heather is a Consultant Medical Physicist at The Christie hospital, honorary Lecturer at the University of Manchester and University of Salford, and visiting Professor at the University of Cumbria. Heather founded ScienceGrrl in June 2012 and oversees the day-to-day running of the network, including communications and collaborations with local leads. When she’s not working, Heather enjoys running, cycling and spending time with her sons.